Just a few photos here to show some of the valve mods that we made to a 5" Modelworks Britannia that we had come through the workshop.   The loco also came in with bowed running boards (a common cosmetic issue with MW Brits), that needed a full half inch of shims on the brackets to lift them in the center up to true.  Visually though it makes as much difference to the look of the model as finishing off the firebox front cowls and domes properly.

The major problem though on this particular model was the valve bobbins.  When we initially test steamed it, there seemed to be nothing doing on the left hand cylinder.  There was an acceptable, if badly timed chuff from the right, but nothing at all from the left.  With the running boards removed, and the valves extracted, they were found to be completely different to each other in both diameter and length.  I mean,.... completely different!!  See the photos below.

The valves were correspondingly machined down, the port events calculated accurately, and new captive PTFE bobbin faces were machined and fitted.  We also added a square to the ends of the valve rods so that future extraction is much much easier.

It is always difficult to know exactly how "sloppy" to make PTFE vlaves as the expansion coefficient of iron is about 12^-6 and ptfe is roughly 10 times that and steam engines do get warm!  The internal diameter of the PTFE faces is larger so it can expand inwards more, rather than entirely outwards potentially binding up on the valve liner, and then just have it supported laterally so it doesn't move back and forth on the bobbin.   They aren't made too much under size (0.13mm or 0.005" Diameter) as they can expand inwards a little if needs be.  Even so, running on air the loco will blow past as it is essentially running cold and unexpanded,..... yet seals beautifully on steam.  Getting the correct tolerances is a bit of trial and error unless you get your calculator out and know the temp of your cylinders when hot..... which we didn't!

The return cranks were then reset and pinned, the loco timed,..... and there's a video below to show you the results.   It's actually now a lovely drive, a really meaty feeling model.  A great chuff with a strong grip, but also a docile and controllable regulator. 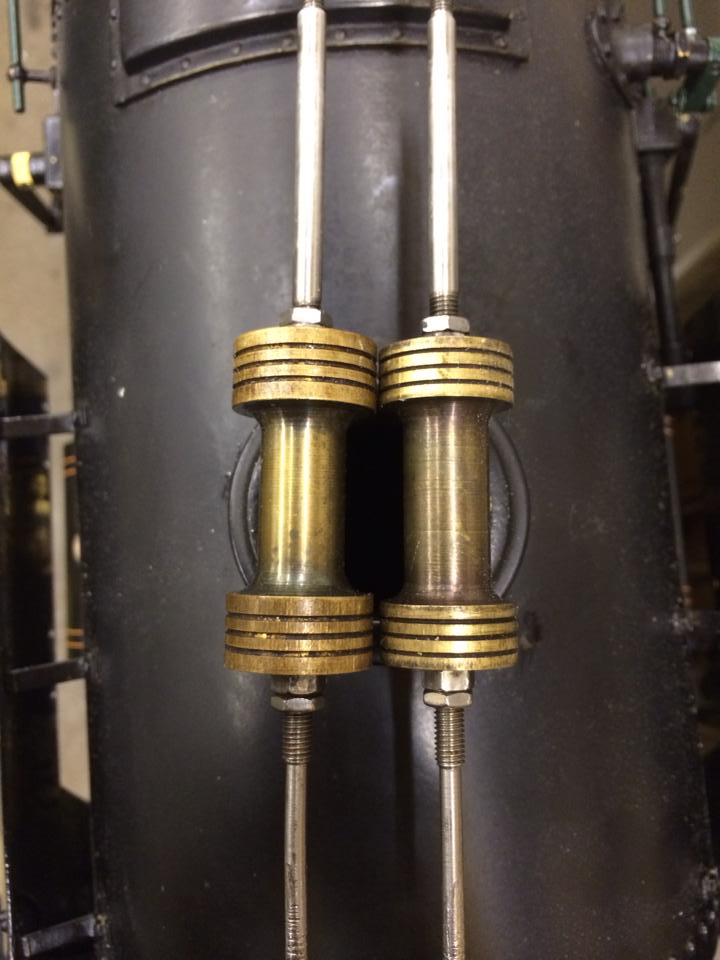