Large locomotives requiring power outputs within a limited loading gauge resort to the adoption of multiple cylinders and this gives rise to problems in valve gear design. The provision of three or four cylinders brings a temptation to save weight and maintenance by deriving the valve drive for the extra cylinder(s) from the two sets already necessary.

Perhaps the most celebrated example of conjugated valve gear for three cylinders is the Gresley LNER arrangement in which Holcroft was consulted. Although successful enough to warrant production in quantity the distinctly syncopated beats and the tendency of the middle valve to over-travel at speed, producing an imbalance of power and overheating the big end bearing, bear testimony to the problems involved. In addition it must be noted that Gresley’s successors, who were probably those most expected to solve the problems at first hand, steered clear of further conjugation.

The provision of excellent valve timing in the outside cylinders may not always guarantee the performance of the derived gear and some compromise may have to be made in order to find a suitable match in the third cylinder. Fortunately simulation can now evaluate the circumstances and modify the basic 2:1 components. Note that the derived valve drive may at the same time be reversed from the other two and may also be pitched against a different length of connecting rod, introducing further complication.

Where three sets of gear are contemplated the design most often precludes duplication inside the frames of that outside by space limitations. The inside connecting rod may be much shorter and the valve gear compacted. It becomes incumbent on the designer to produce an inner gear replicating that outside the frames in its propensities throughout the working range of cut offs – no mean feat. Furthermore, the reversing arrangements, from a single action in the cab, must uphold this match, otherwise a good degree of equality achieved both inside and out may in combination give rise to double the individual discrepancy.

It is one thing to design an outside valve gear with good equality between front and rear ports, thereby matching two of the cylinders, but quite another to design a matching third, inside cylinder gear, in a more contracted space and against a shorter connecting rod. To their great credit the Peppercorn men did so for the A1 Pacifics, save for a small and unaccountable error in the weighshaft arrangements. Clearly they had realised that the two well matching designs required correlation in the two weighshafts in order to work properly through a single reach rod from the cab.

To this end they arranged for the operating arms to differ in length by ½″ so that both sets of gear coordinated the cut offs. Inexplicably, in reference to the LNER drawing, these arms should have been reversed so that the longer of the two operated the inside gear. A better match and coordination would have been the result and, although the A1s were highly rated workhorses, one wonders how a known factor became reversed in practice – perhaps lunchtime intervened?

Investigating by CAD the outer combination lever lower pin travels 26″ and the valve pin movement is symmetrical about a vertical centreline. The inner gear lever travels 26.026″ but the valve pin travels a fraction under that of the outer pin (3.488″ to 3.492″) and is quite asymmetric (rearward bias). This is achieved by shortening the union link and the cylinder bore to valve bore distance is less. The magnitude is therefore closely similar but the timing input is skewed to suit the oddities generated by the eccentric drive. Whilst this practice is fairly widespread it is extremely difficult to define logically in design – the simulator can show the veracity but there does not appear to be any set procedure at the design stage to ensure the desired result. The variables involved are too manifold to predict a result without considerable experience and understanding of Walschaerts’ gear well outside the mathematical basis.

The expansion link swings are unequal and deliberately so (inner gear). The absence of dimensioning for the drive pin requires some astute deliberation in order to give the simulation fair trial. My guesstimate to match with the outer gear proved to be accurate, as varying the amount of foreset temporarily will show up in the equality of events graphs. Although my guesstimate was logically based this was not a mathematical estimate and sheer luck may have played a part, however much the simulator verifies my judgment. Backset (foreset in this case) is a recognised modifier both for equalisation and timing manipulation. The amount cannot be predicted prior to simulation.

Essentially what we have is the combination of two distorted component inputs designed to complement each other. It is difficult enough to design a good symmetrical layout of Walschaerts’ gear with the minimum of input distortion, without having to distort elements deliberately to match inherent distortion in one or other of the components. It is important to realise that the distortions are timing distortions and vary throughout a 360o cycle. This pernicious problem has to be overcome by the application of considerable experience before fine-tuning either on a large model or by simulation – simply altering various parts in a simulator on a trial basis frequently leads into a morass. In the case of the A1, simulation verifies the efficacy of the resultant gears but gives few clues as to design parameters and procedures either in the initial stages or the finer tuning.

It is simplistic to expect that two sets of gear easily satisfy four cylinders by inserting a 180o rocker. Although the outer crank is displaced at 180o to the inner crank, or more accurately because this is so, the piston/valve relationships cannot match one to the other except at dead centres: the rocker reverses the valve travel pattern, with all the little idiosyncrasies, but against a different set of crank angles.

A scissors gear suffers in the same way, prompting W.H.Pearce to devise the unique arrangement used in the Kings and Castles of the GWR. Charlie Dockstader’s simulator now allows investigation of the cranked rocker and short connecting link devised to accelerate and delay the derived valve to conform more nearly to the primary drive and its events. The correct values and placement of the rocker and its link are critical to success.

Matching valve events in another 4-cylinder arrangement is also necessary: Garratt locomotives involve one chassis performance in forward gear matching that of the other unit in reverse gear. Analysis of Beyer-Peacock valve gears reveals most astute design in matching the events of forward and reverse gears to achieve this, though the process is far from easy. Most engines spend the majority of time in forward running, often allowing the bias of forward gear at the expense of back gear, which is frequently required only in full gear to back the locomotive itself over short distances. Where tank engines are required to perform equally well in either direction the matching of forward and reverse gears is more pressing. The aids to good matching are initial geometric symmetry and the avoidance of compacting the arrangement, particularly when modern valve travels are demanded.

4-cylinders may be accomplished from two sets of valve gear by conjugation in a similar way to that for three cylinders, as Holcroft showed, and giving eight exhaust beats per wheel revolution. The disadvantage, besides the matching of events presented in all the cases of derived motions, is a multiplication of pin joints exceeding that from the use of individual gear sets. 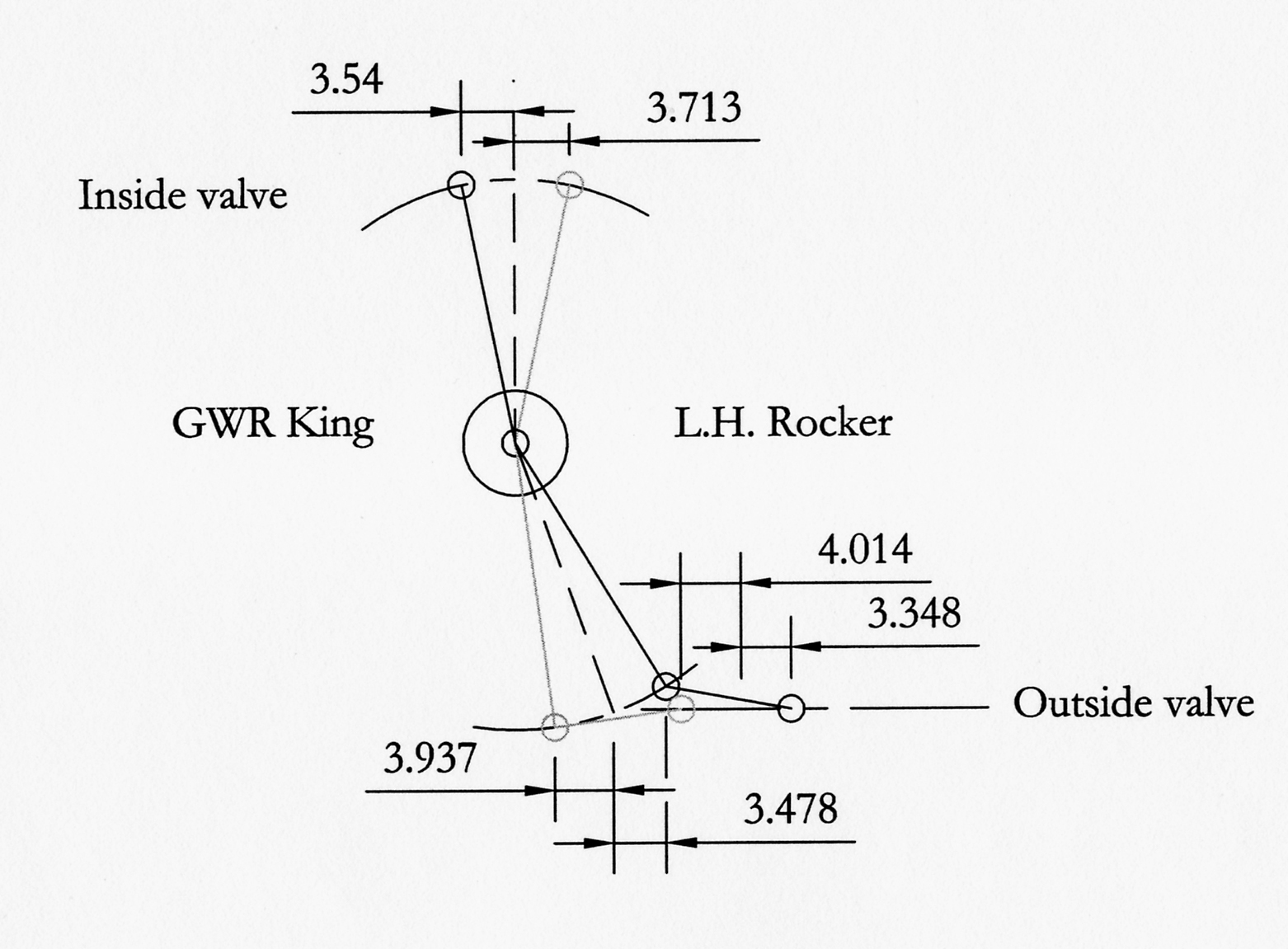